In the past year, thanks to the use of robots, the pharmacy has saved eight full-time positions for a  nurse. The two pharmacy robots prepare nearly 150,000 infusion bags and syringes for treatments in children with cancer. This allows nurses to spend more time caring for children with cancer and work more safely. Previously they prepared many syringes in the nursing ward, now these are made by the pharmacy robots and delivered ready-made to the ward. These performances were announced in the auditorium on February 6th during a national symposium on robot technology in the auditorium of Princess Máxima Center.

Precise
This type of pharmacy robots are the first in Europe. In the pharmacy cleanroom, the robots do the dissolution, acceleration or injection of intravenous medication in an infusion bag or syringe. The robots work gravimetrically (weight control before and after) and extremely precise. The quality of the drug preparation becomes even higher than manual preparation in the pharmacy.

More care
The biggest change with the arrival of the robots is the reduction of the workload for pediatric nurses and pharmacist's assistants. First, eight employees were needed to make and check certain medicines manually, now one person supervises two robots at the same time. This allows the nurses to spend more time caring for children with cancer. Rogier Lange, hospital pharmacist: ‘The robot project of the Princess Máxima Center is a leader project of the Action Learning Network of the Ministry of Health, Welfare and Sport and won the second prize of the Health Valley Bridge 2019. We proudly presented the performance of the robots to our colleagues from the Netherlands and Belgium.’ 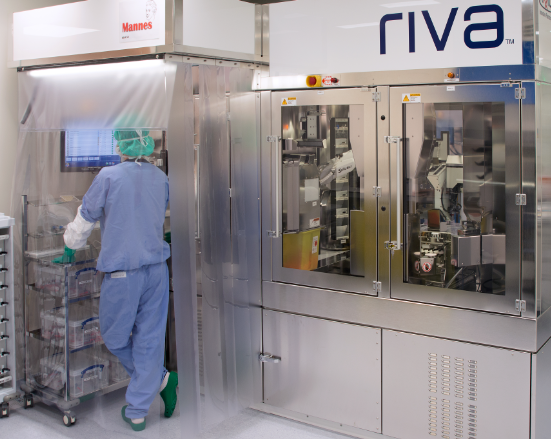