On Monday, 31 August, the oceanographer Erik van Sebille won the third Agnites Vrolik Award for his research into ocean currents. This prize, which will be awarded by the Utrecht University Fund for a period of 10 years thanks to a bequest from an alumnus, highlights the vital impact of UU's research and shows that it can bring rich rewards. Van Sebille develops software that models ocean currents and can therefore map out the journey of plastic waste in the oceans. Upon awarding the prize, the jury said that 'Erik is an outstanding scientist, whose academic output and intense commitment to society are truly admirable.'

Van Sebille and the other researchers nominated were kept in suspense for a long time, as the planned presentation of the award during the Dies celebration had to be postponed due to the corona crisis. Eventually, the prize was awarded during the opening of the academic year, when Lodewijk Hijmans van den Bergh, chair of the Utrecht University Fund, Margot van Sluis-Barten, the new director of the Utrecht University Fund and Anton Pijpers, chair of the Executive Board, presented Erik with his prize of €25,000 and the Agnites Vrolik medal.

Together with his colleagues, Van Sebille has developed a computer tool that models ocean currents and can predict where and when plastic waste will wash ashore, facilitating efficient removal of this plastic from the oceans. The Galapagos Islands will be the first place in which the computer tool is put into practice. 'In the Galapagos Islands, plastic particularly accumulates in areas with a lot of wash. Any waste deposited on the beach will be pulled back into the sea by the next tide, which breaks it down into even smaller plastic fragments that can no longer be cleaned up. Using this predictive tool, park keepers can see which islands they need to focus on and when, enabling them to clear up the plastic before it is reclaimed by the sea. 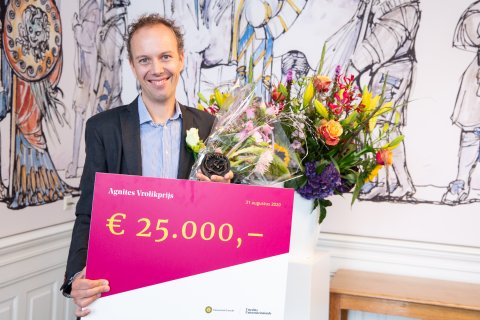 Bequest to the university

The Agnites Vrolik Award, set up in 2017 by the Utrecht University Fund, is awarded to a talented scientist affiliated with our university who is conducting research into current challenges faced by society. It includes a cash prize of €25,000 that is earmarked for extracurricular research. This prize was made possible thanks to a bequest from alumnus Cobi de Bree. Private contributions to academic education and research are becoming increasingly vital in today's radically changing society. More frequently than ever, alumni, current and former staff and other stakeholders are choosing to designate a portion of their estate or entire legacy to benefit an academic purpose.

Erik van Sebille was selected from a pool of six nominated research initiatives: Esther Stouthamer is researching the measurement and modelling of soil subsidence in delta regions, Jojanneke van der Toorn is investigating how diversity-focused organisational policy contributes to offers of paid work and career development for various categories of people, Koen Leurs is mapping out the increasing interdependence between migration and digitalisation, Regina van den Eijnden is exploring how to prevent problematic use of social media and games among young people, and Rianne Dekker and Karin Geuijen's research project entitled 'Plan Einstein' is trialling an experimental system for receiving asylum applicants.